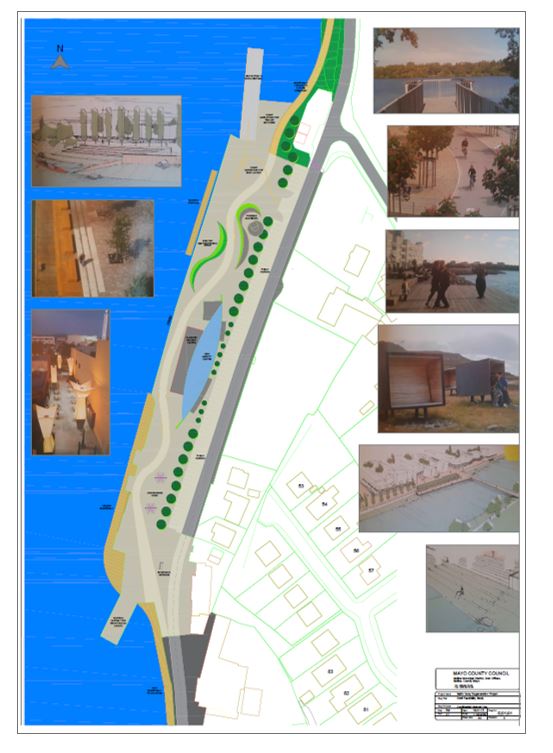 Posted at 16:05h in Uncategorized by Alan Dillon
0 Likes

– Tender for Design Team Consultancy currently underway and to be awarded in coming weeks;

– Works to include redevelopment of the Kennedy Centre complex as new visitor attraction and facility for community use;

– Potential works include the creation/feasibility test of a new pedestrian bridge to facilitate circular walking route from Ballina Quay.

Fine Gael Spokesperson on Tourism and Sport, Alan Dillon TD, has welcomed news on the potential Ballina Quay Regeneration Project with a construction budget of €2.75million.  There is progress on the project with a design team currently being appointed and to be awarded in the coming weeks.  Works will include redevelopment of the Kennedy Centre complex as a new visitor attraction and facility for community use.  Other works include the creation/feasibility test of a new pedestrian bridge to facilitate a circular walking route from Ballina Quay.  It is intended that the Ballina Quay Regeneration Project will deliver a recreational hub and useful civic amenity on the eastern side of Ballina.

Deputy Dillon said: “The construction budget for this project is worth up to €2.75million and has the potential to link-in Belleek Woods with the Ballina via a new pedestrian bridge which has first to be tested for feasibility.  Other elements of the project include the redevelopment of the Kennedy Centre complex.  This has the potential to provide for a new visitor attraction, a facility for community use including meeting rooms and a potential civic reception area, as well as outdoor amenities including public sanitary & changing accommodation.  Other elements include the creation of a new adjoining public plaza plus pedestrian/cycle connections, as well as a development of the existing riverside walk along the Moy.  It is also hoped to improve vehicle parking, safe access to and from the new boating slipway and enhanced pedestrian crossing and movement along the Quay Road.  It will also hopefully include a new pedestrian bridge to facilitate circular walking route from the Quay, through the town connecting the Tom Ruane park, Ballina Town Centre, Belleek Woods and sports amenities, back to the Quay area over the River Moy.”

Deputy Dillon added: “We need high-quality tourism infrastructure to maintain Mayo as one of the real jewels in the crown of the Wild Atlantic Way.  This exciting project for Ballina has the potential to link two great areas with the existing improvement works done to Belleek Woods and Ballina Quay.  On top of the Monasteries of the Moy greenway, this has the potential to offer great recreational facilities to cyclists, locals and tourists.  I look forward to the design team being appointed as soon as possible and for more progression on this project.”