Former Taoiseach Enda Kenny TD has urged voters who gave him their No 1 vote in previous elections to pledge this vote to General Election candidate Alan Dillon.

220 people turned up at the official launch of his General Election campaign on Friday night in the TF Hotel in Castlebar. Mr. Dillon was selected as a candidate for Fine Gael at a selection convention almost two years ago and has been building up his own political profile at a grassroots level since then.

Despite having a high profile on the national field of play with over 100 games for the Mayo Senior Football team, Alan Dillon says he hung up his boots in 2017 and his objective now is to represent the people of Mayo nationally on the political field.

“Through my education, professional career, sport and business, I’ve forged a character that can be very beneficial within the political arena. My aspiration now is for the people of Mayo to put their trust in me once again.

“It was Enda Kenny who ignited my passion for politics by demonstrating just what can be achieved for our county and country in politics. To be taking on the baton is a massive challenge but also an honour, and, I’m a man that relishes a challenge where the prize benefits the people of Mayo.”

Dillon has committed to six key pillars of his campaign focusing on:

2. Securing Technical University status for GMIT Mayo Campus with Castlebar benefitting from the spin-offs of being a university town.

4. Creation of 1000 jobs for Mayo during the lifespan of the 33rd Dáil through balanced regional development, delivery of key infrastructure and transport projects while supporting SMEs, Enterprise Ireland and foreign direct investment companies to invest in Mayo.

5. Achieving carbon neutral status for Mayo, the first county in Ireland by 2030 and developing incentives for communities and businesses to be proactive.

6. Fighting for the interests and incomes of ordinary farmers in the West to allow businesses to thrive into the future against the many challenges ahead.

Receiving a rousing welcome, Deputy Enda Kenny said that Alan Dillon “has the potential to rise through the ranks of Fine Gael and hold a ministerial position if we give him the chance.”

He also stressed the importance of voters retaining the Fine Gael seat in Castlebar in the upcoming election. He urged everyone who has given their vote to him, to pledge it to Alan Dillon.

“I’ll be voting Alan Dillon number one and I urge you to as well. I’ve asked the people who have canvassed for me for 44 years to canvass for Alan Dillon.

“He possesses the mental strength, physical discipline, the commitment, the belief and the conviction to play for your county, to serve your county, and this is what he is translating now into this election campaign.”

“there is an appetite among the public for new voices, new politicians that reflect the community you represent.” 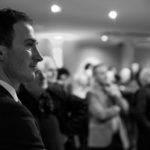